I can almost guarantee that if you talk to anyone who flies for a living , they will have had an epiphany moment in their lives where they fell in love with aviation. My first ‘lightbulb’ moment was when I was young enough to still have a bedtime story in the evenings, where my Dad mentioned that when he was my age he had always wanted to become a pilot. From that moment, I became obsessed with fulfilling my dream, and spent my childhood dreaming of flights to tropical destinations.

I feel lucky that I discovered aviation at such a young age, and I spent my childhood trying to do everything I could to ensure I would eventually be able to achieve my dream. Before my GCSE exams, I spent hours sending letters to every airline I could find an address for asking for advice regarding options and the best subjects to study, as well as talking to a female easyJet pilot who gave me wonderful advice regarding what aviation recruitment look for. I was very aware that leadership and teamwork skills are important, and I participated in every opportunity I could, from being part of my local football team, teaching dance to younger students, and signing up for any other extracurricular activity possible at school.

I eventually had my first flight in May 2005, at my local glider club, shortly after turning 11. At the time I was the club’s youngest member, with 5 years to wait before my first solo flight, but I just couldn’t wait to get up in the air! After that first flight at the controls of an aircraft, the ‘aviation bug’ had definitely settled in to stay. 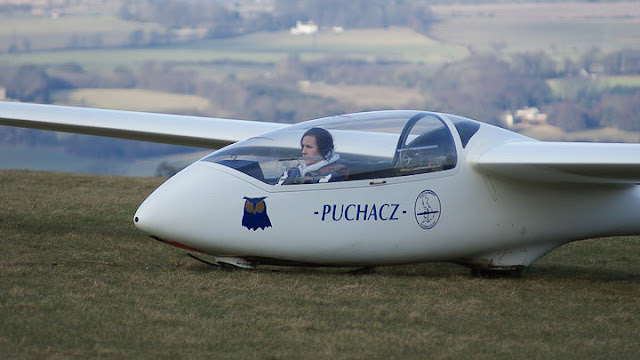 Gliding was a fantastic way of beginning to learn how to fly, with the same principles of flight that I use today in a Boeing 737. Gliding is cheaper than learning to fly a powered aircraft, but I learned the same basic stick and rudder techniques that I would go on to finesse in a powered aircraft during my commercial pilot training. Although I didn’t quite realise it whilst I was 11 and engrossed with learning how to fly, I developed other skills which I’ve gone on to use as a commercial pilot too. Gliders fly in a similar manner to birds, using warm rising air, with no engine to depend on to give you the height you need to get back to your airfield. Therefore good decision making skills are vital, otherwise you’re definitely landing in a farmer’s field somewhere!

Whilst I was progressing towards my first solo at the gliding club, I joined my local Air Cadet squadron shortly after turning 14. I was intrigued by the opportunity of free flying, and I was eventually lucky enough to receive a gliding scholarship at RAF Topcliffe, where I went solo in a Vigilant motor glider (also known as a Grob 109B). As well as the flying, the structure of cadets provides fantastic leadership and teamwork skills, as well as a way to push yourself out of your comfort zone and try something that most 14 year olds couldn’t dream of. I spent weekends meeting new people, learning how to navigate and map read, hiking in the Lake District, learning and then going on to teach interview technique, practicing firing a semi automatic rifle, and studying subjects I would need for my ATPL such as propulsion and principles of flight. The highlight of my time in the Air Cadets was a trip to Hong Kong, where I took part in an International Air Cadet Exchange and had the chance to explore China with the local Air Cadets, as well as a trip up the Air Traffic Control tower at Chek Lap Kok Airport. I was aware that airlines require more than just good handling skills, and I even talked about my achievements in cadets during my interview for my current job.

Around this time, I graduated high school, and knew that University wasn’t the right choice for me. I felt ready to start my flight training, so I started working in retail full time, whilst looking into the financial side of things and the courses available out there.
I eventually decided on a pilot training college in Ireland, and attended an assessment day in Edinburgh. The day consisted of an interview, logical reasoning and a COMPASS test, which is computerised and assesses hand/eye coordination, mulit-tasking ability, mathematics and verbal reasoning. I passed the interview, and planned to start in August 2012. However, things weren’t meant to work out that way. Shortly before I was supposed to start my course, the college stopped operating and went bankrupt. I was devastated, and initially I had no idea what was going to happen with the money that I had paid as a deposit. Luckily, the Irish Aviation Authority contacted various other flight schools, and CAE Oxford Aviation Academy agreed to take on the students that had been affected, without having to pay Oxford’s initial deposit. Unfortunately there were students who started Oxford with me who ended up losing money, so if you’re looking into beginning your flight training, I would strongly advise to never pay all the money for your course upfront!

After almost 8 years after my first ever flight, I moved to Oxford in November 2012 to start the long journey towards earning my Air Transport Licence. Although I was unbelievably nervous, it felt that I was a little closer to fulfilling my childhood dream, and I couldn’t wait to start studying something that I have always been passionate about!

Beyond The Flight Deck